Wednesday, August 9, 1989, was a long day. I woke up on an Air Force base in the northern wilds of Maine, and went to bed in a Motel 6 in San Jose. In between, I made connections in Boston and Dallas.

Not long after arrival at SJC, I met up with officemates John and Paul, along with their SOs Anna and Sue, respectively. We’d converged in sunny California for the wedding of our other officemate Will, to Kate, a fellow math grad who’d started at Illinois a year after we did.

Today, three vignettes from that week spent on the west coast:

1) On 8/10 Kate went with us to see the Giants play the Reds at Candlestick Park. My home team had finished second in the NL West the previous four seasons, but the Reds were not in contention this year—I guess the Pete Rose betting scandal was a distraction? (Rose would accede to banishment from the sport just two weeks after this game.) The Giants, on the other hand, were heading toward the division title and a World Series berth.

It was a mildly notable game, featuring the comeback of southpaw Dave Dravecky to the mound after almost fifteen months away (he’d had a tumor removed from his pitching arm the previous October and was returning after aggressively pursuing recovery). We watched a remarkable performance from the left-field bleachers—Dravecky pitched eight solid innings, touched only by a 3-run HR in his final frame of work. The Giants held on to win, 4-3. This was also the game in which I’ve come closest to catching a batted ball; Matt Williams’s two-run jack landed just two rows directly behind us.

2) The wedding was late Saturday morning at a Catholic church. Paul, Sue, John, and I were all members of the wedding party. Here I am with John, all tuxed up thirty years ago this morning. 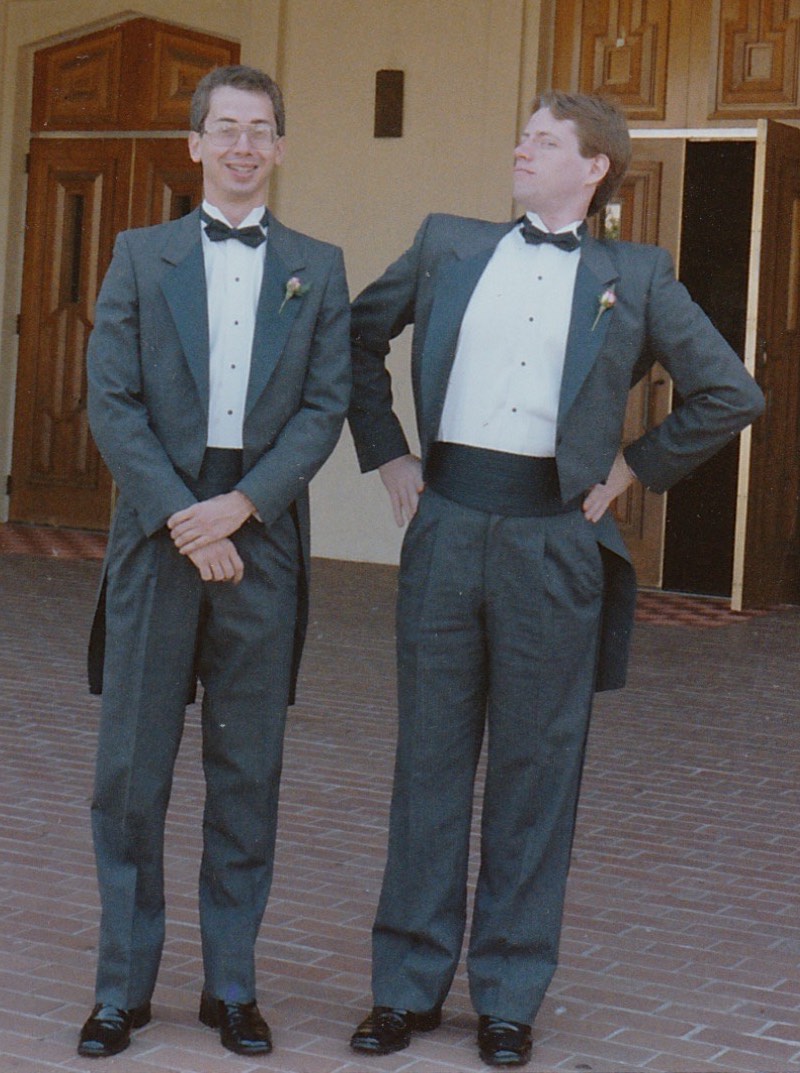 The reception afterward was fairly low-key, in the back yard of either Kate’s parents’ or sister’s house. At one point, I wandered off to the edge of the patio and allowed my thoughts to drift about two thousand miles away. Many of my Transy friends were attending another wedding that day, one to which it wasn’t appropriate for me to be invited. I might well be making this up, but it’s just possible I looked east and lifted an imaginary champagne glass to wish that other happy couple the best before rejoining the festivities around me.

3) The five of us packed into Paul and Sue’s car on Monday morning (yes, they’d driven from Illinois) and headed off to the Napa Valley, where we met the newlyweds for some winery hopping. We probably hit four or five spots, but the only one I specifically remember is V. Sattui, in St. Helena. (Back then, I seemed to favor dessert wines such as Gewürztraminers, so that’s probably the kind of stuff I sampled that day; I’m much more of a cabernet sauvignon guy now.) A picture that one of us, probably Anna, took that day of grapes on the vine got blown up to poster size and graced a wall at Paul and Sue’s house for years afterward.

By the time we were heading back toward San Jose, I was getting restless. I hadn’t rented a car (John and Anna had), so I’d been at the mercy of others for transportation. There was one full day left in Cali, and I decided I’d use it to break away for some sightseeing on my own. Back at the hotel, I made arrangements to pick up a car the next morning. Other than the time we’d spent on the beach near San Francisco’s Presidio the day before, I hadn’t seen much of the water. So I headed south, to hook up with U.S. 1 and catch some of the coast. A little more on this come Thursday.

I didn’t find any tunes from summer 89 with lyrics that seemed right for the head of this post, so instead, you get two different older songs sharing a title that’s tangentially related. First, it’s Lesley Gore performing one of her last hits, from 67, on an episode of Batman:

And then there’s the lead-off track from the U.S. version of Sweet’s 78 LP Level Headed: