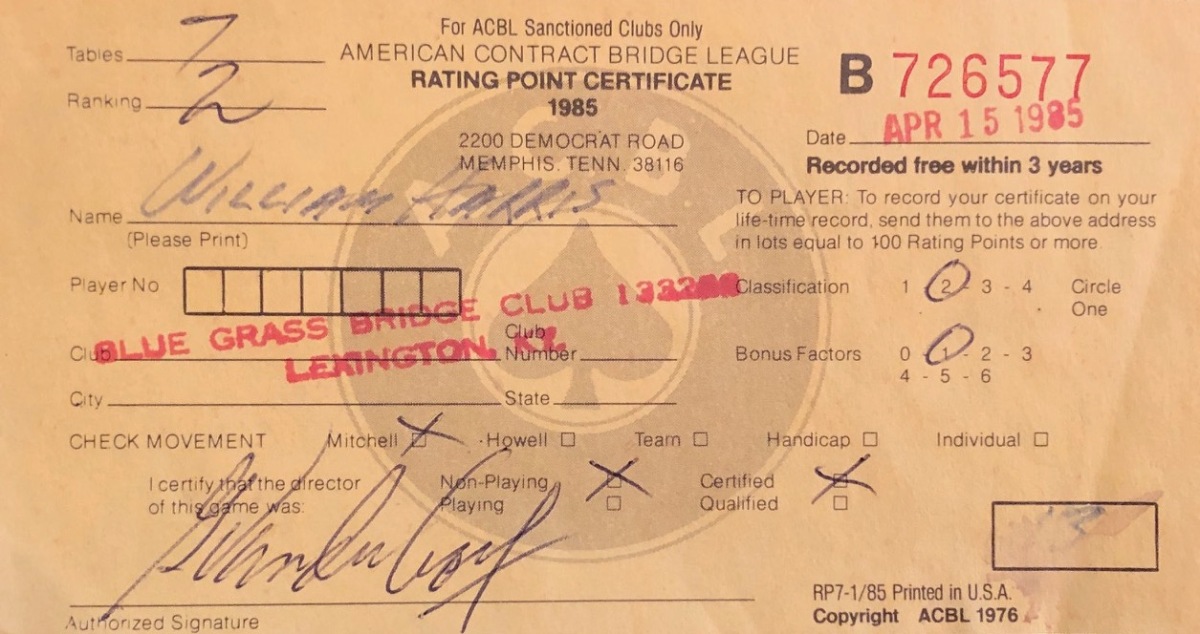 Yesterday I spent the day at a bridge tournament in Lexington. My team won the knockout event we entered. It was a little unexpected, given the experience and quality of some of the other teams, but overall we played well.

I don’t get out to play all that much these days, maybe 3-4 partial weekends for tournaments and a dozen club games a year—this was my first time out since February. Maybe I’ll do more after the nest empties, but the biggest impediment to playing these days is my job; as the average age of the bridge-playing population continues to increase, most folks are retirees and the better-attended games are those offered during the day.

My parents both learned to play bridge in college, though I think Dad took to it better. The game lingered a little in the air as I grew up; my sister and I found and played a few times a variant of the game, Bridge for Two, which the folks must have purchased in the early years of their marriage. I made noise occasionally about wanting to learn to play the real thing, but I don’t think there were more than one or two half-hearted efforts toward teaching us. I played lots of other card games with friends—spades, hearts, rummy—but learning bridge remained elusive.

Finally, the ball started rolling in the summer of 84. The four of us tried a few hands one evening after Sis and I returned home from our respective colleges. I had no idea what I was doing but my interest was piqued. A few weeks later I was working as a counselor at a computer camp at Transy, and it turned out a critical mass of the staff wanted to teach ourselves the game. Bidding was primitive and at times we knew just enough to be dangerous, but some of us got hooked. Mark H (the need for an initial will make itself clear in the coming weeks) was my best friend at Transy and one of my fellow counselors that summer; after we got back to school in the fall, he and I whiled away many an hour dealing, bidding, and playing out hand after hand. We began to reason out the skeleton of a bidding system, trying it out on our friends when we got together on the weekends.

Sometime during that junior year of college we realized there was a bridge club in town. One day I called to find out about the times of their duplicate games. Monday evening was novice night, a game for people with less that 20 Masterpoints (the currency of the American Contract Bridge League and the means by which bridge players are ranked). So it was on 4/15/85 that Mark and I drove out to a strip mall at the corner of Man o’ War Boulevard and Pimlico Parkway (is Lexington a horse town, or what?) and found the Lexington Bridge Club tucked inconspicuously at the end of a hallway. We were by far the two youngest people there and maybe, outside of the director, the only males.

This being the mid-80s, the venue was the opposite of smoke-free (if I get lung cancer, those first years at bridge clubs are a likely contributing factor). Regardless, I met many delightful folks that evening; some have passed in the intervening years, but there a few I still see occasionally (one just yesterday): Sheila, Sally, Pat, and especially Della and Geneva.

One generally gets (fractions of) Masterpoints by finishing in the top 40% of the field in a bridge game. I guess it helped that we were among fellow novices that evening, but Mark and I finished high enough to earn our first 0.13 MPs. Needless to say, we went back regularly over the next thirteen months, right up until graduation from Transy. We became known as “the boys.”

When I returned to town a little over six years later, the club had moved. There’d been a big hubbub over the smoking issue and some folks stopped playing when they couldn’t smoke at the table (it’s striking to think how much things have changed in this respect over thirty years, especially in a tobacco state). While one always has more to learn about this magnificent game, I was a fair amount better at it than when I had left in 86.

Such was my bridge obsession in the spring of 85 that I was inspired to write a parody of Don Henley’s current hit. “All She Wants to Do Is Pass” does a decent job of mimicking the original in a few places (“The Stayman Convention—the local bid”) but it could definitely use some polish, and of course, it’s a little funnier if you understand bridge lingo. Nonetheless, here it is for your reading pleasure: 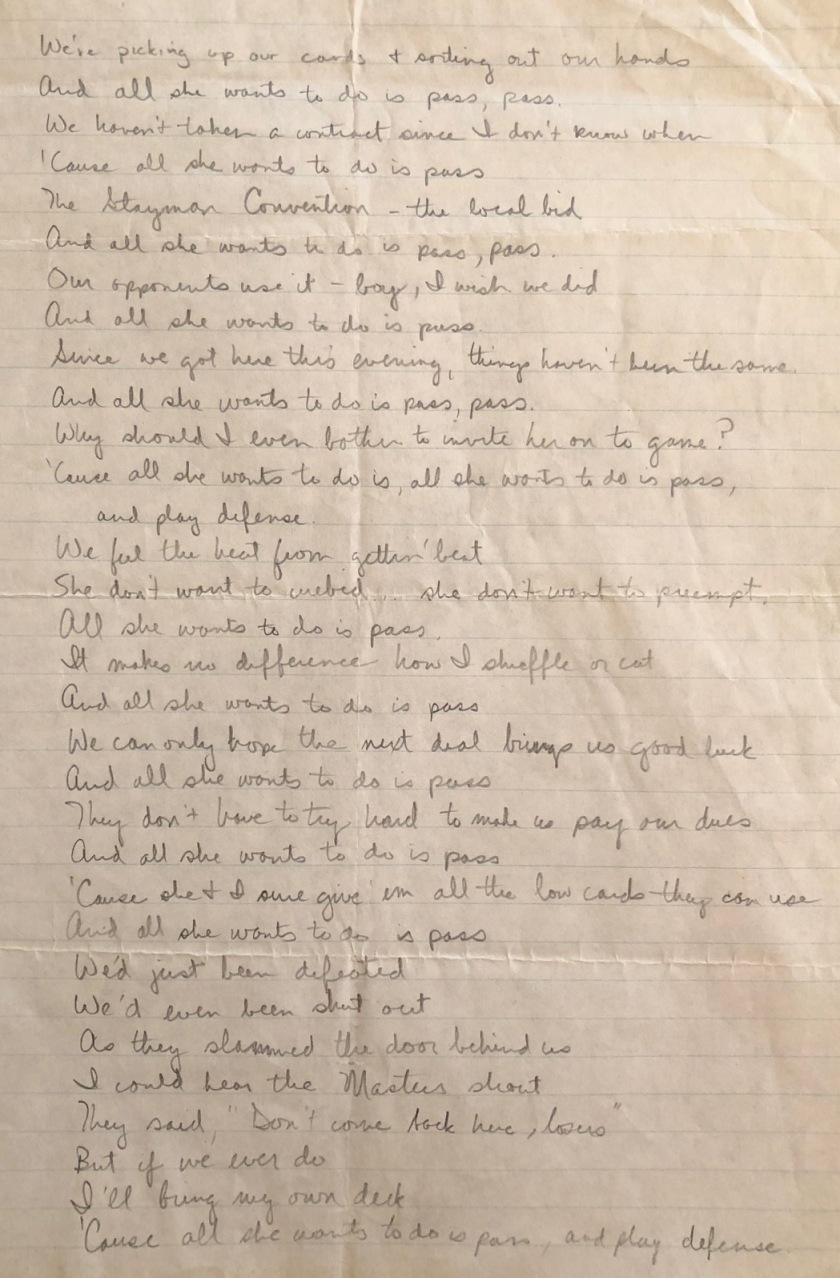 Henley himself is #14 on this week’s show, heading down after peaking at #9. Listening to “All She Wants to Do Is Dance” now, it sounds over the top enough to warrant parody from other realms besides that of a card game.

We’re heading into graduation week here at Harris Central, with lots of events to attend and preparation for celebrations to undertake in the coming days (a party at our house on Saturday, and Ben’s Eagle Scout Court of Honor—jointly with a good friend—on Monday). I’ve got a recurring feature to put up later in the week, but there’s a solid chance that posting will be lighter than normal for a little while.