There are a lot of threads to try to tie together here—let’s see if I can make something coherent out of it.

1. Two weeks ago my son attended an overnight admitted student event at my alma mater. The experience was different from the others he’s attended this spring: instead of staying in a dorm with a current student, he and the others were housed together overnight in the campus recreation center. He had a good enough time overall, but I think he would have preferred getting to meet folks who were already attending TU, rather than hang exclusively with fellow HS seniors who may or may be there come September.

2. At the end of 84, I received a blank book from my friend Stacey, a first-year student from Lexington who had begun dating James during the fall semester. I’d tried to keep a journal/diary a couple of times in the past, something I must have mentioned to Stacey. Her inscription, “Best wishes. I know you will use it well,” displays more confidence than I merited, but to a modest degree I held up my end of the bargain. Even though the half-dozen or so entries run only from 12/30/84 through 1/20/85, one of them is a lengthy overview of highlights (and lowlights) of the year just ended—I’m super-glad to have that written down—it made this post better, for one thing. Another includes what I thought were my ten top songs of 84. 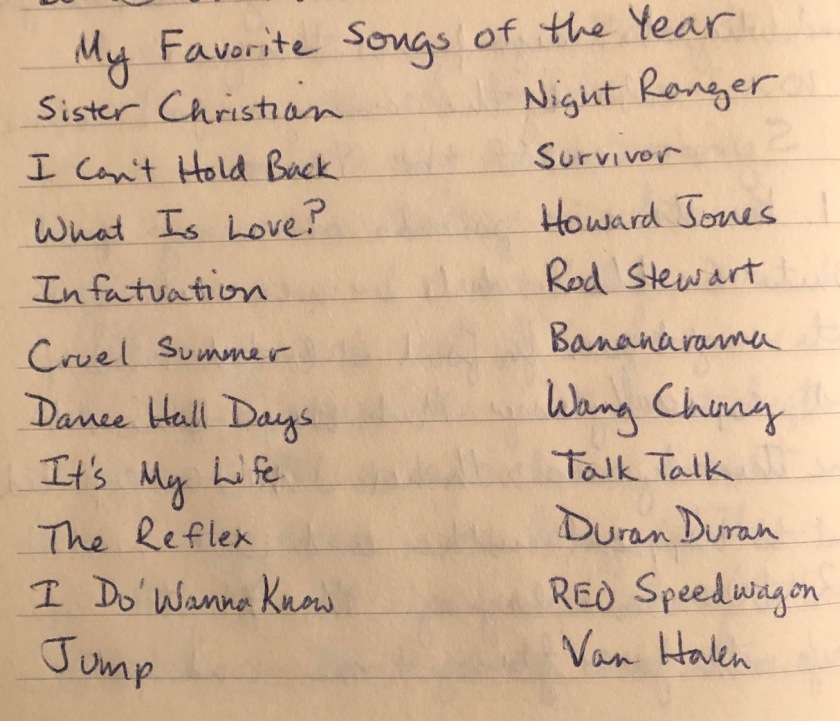 The only one of those I’d automatically renounce now is the Stewart.

3. I’d first met Stacey briefly back in early April, when Transy spent almost an entire week hosting sixty academically-talented prospective students (one set of thirty on Tue-Wed, another on Thur-Fri). They’d come to our campus to interview for one of twenty-five full tuition and room/board scholarships (nowadays, with costs so much higher, TU offers just four full tuition-only awards). James and I played host to interviewees both sessions; the second was the brother of one of my W-V classmates.

4. During the first session I formed a friendship I’ve maintained to this day. I ran into Kristine at a Galaxian machine in the game room of our recently-opened campus center. She’d gone there to calm her nerves; in an attempt to be a welcoming host, I struck up a conversation. We made an instant connection and talked for a decent while in the adjacent canteen. Eventually Warren and James dropped by and joined in. Kristine was from Nashville; since Warren had spent his first baker’s dozen of years there, they had a fair amount of common ground.

It’s fair to say that some of us were smitten. Long story (and it’s a pretty long story!) short, Warren and Kristine wound up conducting a long-distance romance for a few months. He and I drove to Nashville over Memorial Day weekend to see Kristine (we stayed with Warren’s aunt). She had been offered the scholarship at Transy but turned it down—she wanted to go to a larger place. Kristine and I maintained a pen-pal friendship, seeing each other every once in a while even, for a number of years and managed to re-connect via the magic of the Internet in the late 90s. She became a small animal veterinarian, fulfilling the dream she told me about the day I met her; recently she and her husband relocated from Florida to England.

5. The other friendship to come out of that week was with Thomas, a high school classmate of Stacey’s. Saw The Natural with him over the summer (I was on campus for a few weeks as a counselor at a computer camp)—I’ve always thought it was one of the oddest movies I’ve ever seen. He hosted the super-fun Friday night gaming get-togethers that were going on when I returned to KY following grad school. There are a decent number of songs that make me think back on those evenings at Thomas’s.

6. Musical interlude: March and April of 84 was the Spring of Yes. “Owner of a Lonely Heart” had put them back on the map over the winter. Warren had been a long-time fan and got James and me interested by playing 90125 and The Yes Album for us. From there, James went whole hog, getting all their albums within the next year (yes, even Relayer and Tales from Topographic Oceans); based on frequency of play in our room, I’d guess that his favorite was Fragile. He saw them three times on tour that year (Warren and I joined him for the last of those, in Cincinnati). He mastered a chronology of the personnel changes that seemed to occur between releases.

7. Warren and James found out in early March about the many versions of the video for “Leave It” shot by Kevin Godley and Lol Creme that would be debuted by MTV over a two-week period. They made sure to camp out in front of the TV in the campus center to see them all. I missed out on that fun but received reports on each evening’s variation. It looks like MTV broadcast a special sometime around then about the making of the clips; one of my pastimes while watching it last week was determining how many cigarettes Godley could smoke over a twenty-minute span.

I gotta say I’m not especially fond of the version that became the “official” video—too much visual gimmickry. I think I’d rather just see them stand still upside down for four minutes. “Leave It” is #32 on this show and would get to #24.

8. Stacey and I became less close during my senior year; her relationship with James changed, too, though it took over a year afterward for it to come to a final close. I lost touch with her after I graduated, though we did eventually become FB friends. She had been a math/CS major in college, got post-graduate degrees in philosophy, and wound up in the Philly area. Unfortunately, she passed away in May 2016. Some of her area friends organized a memorial service at Transy a few weeks later—it was good to have the opportunity to attend and mourn the loss.

I have a number of fond memories of Stacey—we talked about music, of course (she played a small but important role in one of my first blog posts), but also about life. In my write-up of 84, I say, “…she has become one of my better friends this past fall, and one of the few people I trust with…stuff I don’t want lots of people to know.” So much of one’s existence is about impermanence, but she and I shared dear friendship for a while, long enough for her to offer me the gift of space to put my thoughts into words and into writing. For that I’m enormously grateful—I can only hope that I reciprocated sufficiently.

9. Ben did make his decision this past week regarding where he’ll be attending college. I must say it feels like a great fit for him; I’m excited to see what comes next.

Note: Obviously, I got to 3/31/84 a week later than usual, which is okay—it wound up being a rather different post because of that. This week’s 80s rebroadcast is from 4/4/87, which was played two years ago. That means a post about a song from that show already exists; here it is.