So, “How Deep Is Your Love” and “I Go Crazy” spent 22 weeks together on AT40 (not including the frozen week after Christmas 77), yet in only one of those–the show previous to that displayed below–were they simultaneously in the Top 10. 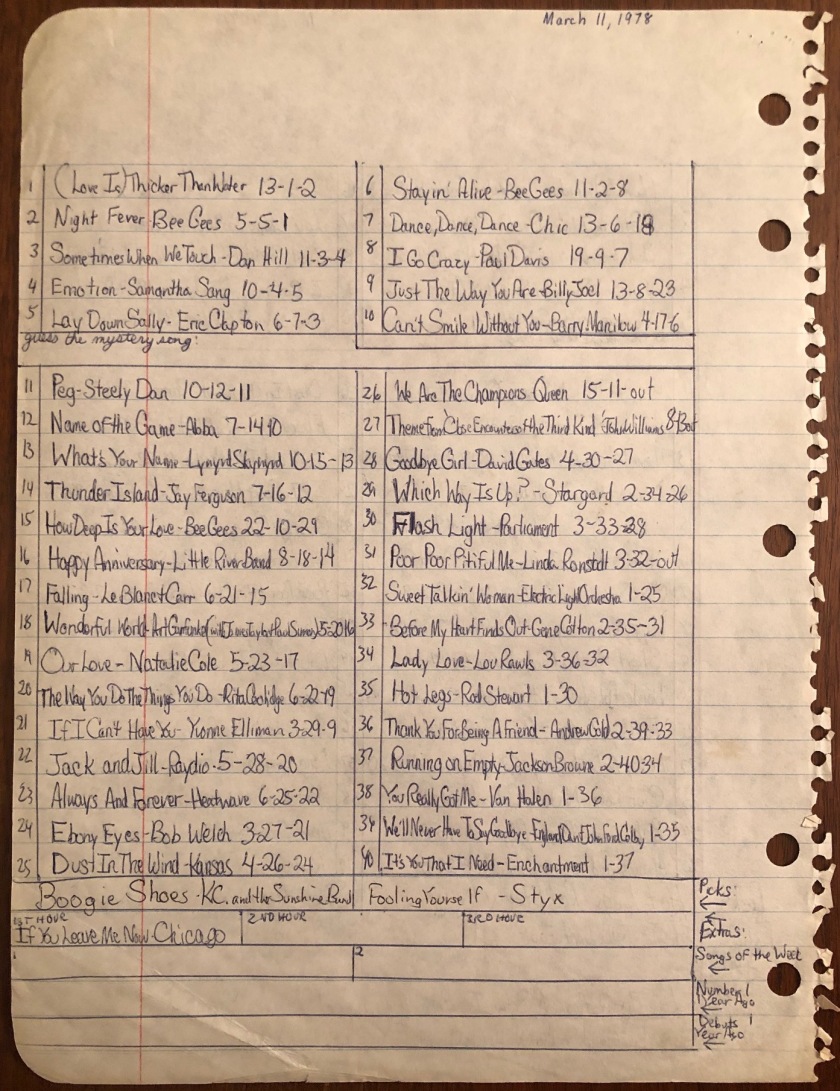 I had a lot of enjoyable experiences in the spring of 81, both academic and athletic (the social side, on the other hand, was much quieter). There are quite a few songs from that period that I really, really liked, and the leading edge of that wave is starting to arrive in the upper half on the ol’ Top 50 chart: “Rapture,” “Living in a Fantasy,” and “Don’t Stand So Close to Me” all had decent helium at this point. “While You See a Chance,” another great one, is lurking at #33. Note Journey’s presence; it was already in its fourth week on my chart. As I mentioned Sunday, it was still three weeks away from being played by Casey. It hadn’t always been the case that Cincy stations would be trying to break songs, but by the early 80s my awareness of newer releases was definitely on the rise.

Cliff Richard is in his second and last week at the top, and Donnie Iris would be taking over for a three-week spin on the next list. Parsons and Benatar are at their peaks. I don’t seem to care for the McClinton, Abba, or Lennon songs nearly so much now as I apparently did then.

One last note: “Skateaway” is sitting at #31 this week; it’d hang out a few more weeks, reaching #28. I’m glad to have ranked it all, but I kinda wish I’d had it go higher…

On the real 81 countdown:
–two other big faves from Spring 81 are showing up in Johnny Cougar and April Wine (and “Don’t Stop the Music” is plenty groovy, too);
–it’s Firefall’s last week ever on the show (save LDDs of “Just Remember I Love You”);
–two songs I didn’t appreciate enough in real time are here on the first page: “Just the Two of Us” and (especially) “Precious to Me;”
–I missed part of hour one this weekend due to some yard work–I wish I’d heard the letter that led to requesting “Don’t Fall in Love with a Dreamer” as a dedication;
–I’d totally forgotten that Casey played an album cut from Dark Side of the Moon–had a non-single been played on the show since the early 70s, when they regularly featured something from the #1 album of the week?
–I’d also forgotten that “9 to 5” had non-consecutive weeks at #1.