Sometime in the later stages of the 70s—I’m thinking it was fall of 78—a new feature began appearing in the Cincinnati Enquirer Sunday Magazine. It was called simply The Puzzle (though I believe the actual name was The Real Puzzle); the author was Don Rubin. The challenges varied quite a bit in nature, but there were a number of recurring themes: spatial reasoning, word play, ciphers, logic, and pop culture (celebrities, TV shows, brand names) were among the most common.   I saved around fifty, and of course still have them. I’ve included three examples (I hope this is fair use, but I’ll take them down if I get a complaint from the copyright holder):

On the one at the top of the post, which appeared forty years ago  next month (oops, it was 4/15, not 3/15), you’re to stand back and identify the bigger picture (of which we’re only seeing a portion). If you’ve navigated your way here to read this, you have a very high probability of being able to recognize it.

Overall, I ate this sort of thing up. I grew up loving riddles and puzzles of various kinds. The majority of the time the challenges were accessible to me (though it sometimes would have helped to be older than a mid-teen). The Enquirer solicited solutions and for quite a while offered matted photo prints of the Cincinnati skyline as prizes (the number of winners was capped at ten each week, and a random drawing was used when there were more than ten correct answers). I submitted correct solutions several times, but was never lucky enough to be chosen. However, my high school English teacher, Mr. Capek, was—he kept his print on display behind his desk for the duration of my time at W-V.

I spent a good bit of time in 1980 creating my own puzzles, maybe about thirty—Rubin was clearly the inspiration for this exercise. Not only did I occasionally riff on some of his ideas, but I also attempted to mimic his sardonic style in the descriptions/instructions. Many are rather lame, but there are a few I’m willing to share. I couldn’t do anything that required artistic talent, for certain; not surprisingly, a couple are music-related. Posting one could be an occasional feature for a while.

This was probably one of my earlier efforts. Again, if you’re here, you most likely won’t have trouble with a matching exercise involving the name/artist of hits of 79. Nonetheless, you’re welcome to have at it. 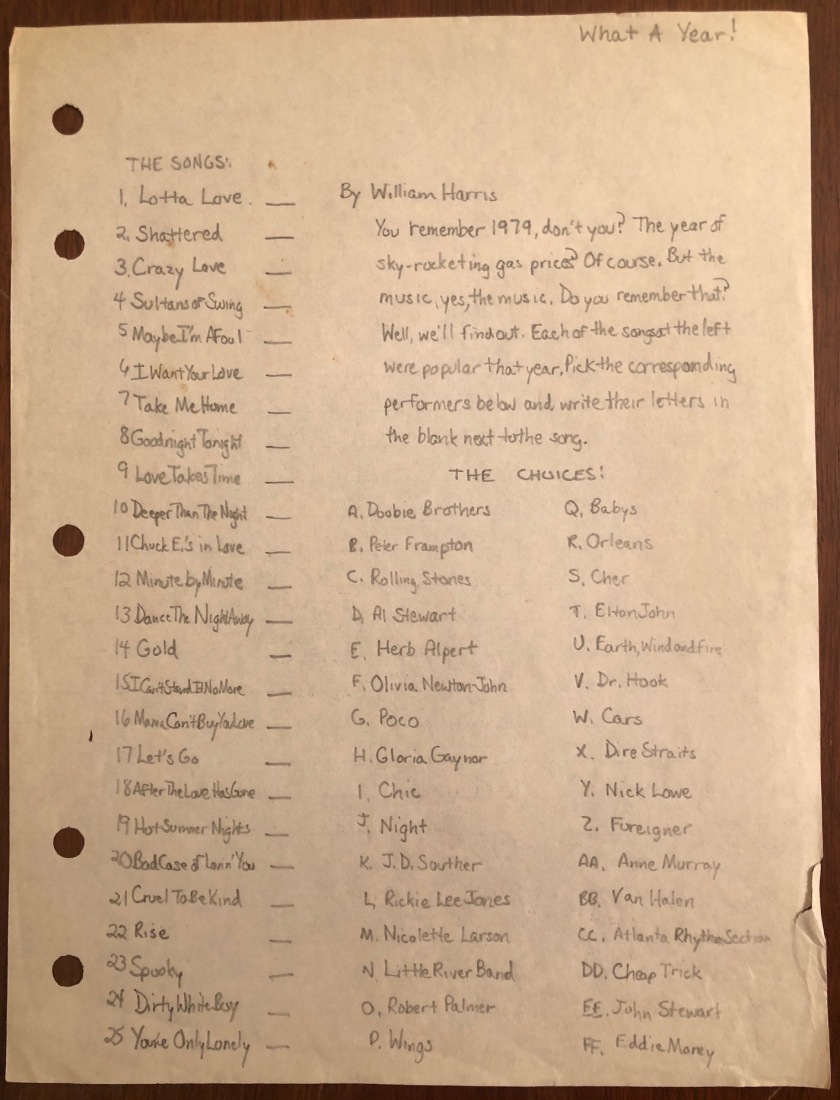