Overnight Kurt Blumenau wrote about discovering Sgt. Pepper’s Lonely Hearts Club Band trading cards, a 66-card set published in 78 in conjunction with the widely-panned movie starring the Bee Gees, Peter Frampton, and myriad others. My Favorite Decade then noted via tweet that he’d written four years ago about the one pack of said cards he bought back in the day. Until today I was unaware such a thing existed, but I can’t say I’m surprised.

However, it did put me in mind of a different set of pop-culture trading cards I dabbled in a tiny bit, way back in 71: that from The Partridge Family. I doubt Amy and I had more than a couple of packs of them, but I clearly remember the cards all had blue borders and some text below the picture. I specifically recalled one of Shirley Jones entitled “Belting Out a Song!”

I’ve got a bin of the trading cards of my youth buried pretty far down in the basement, but after I got home from work today, I felt the need to dig it out and see if there were any Partridge Family cards still around. I found five: 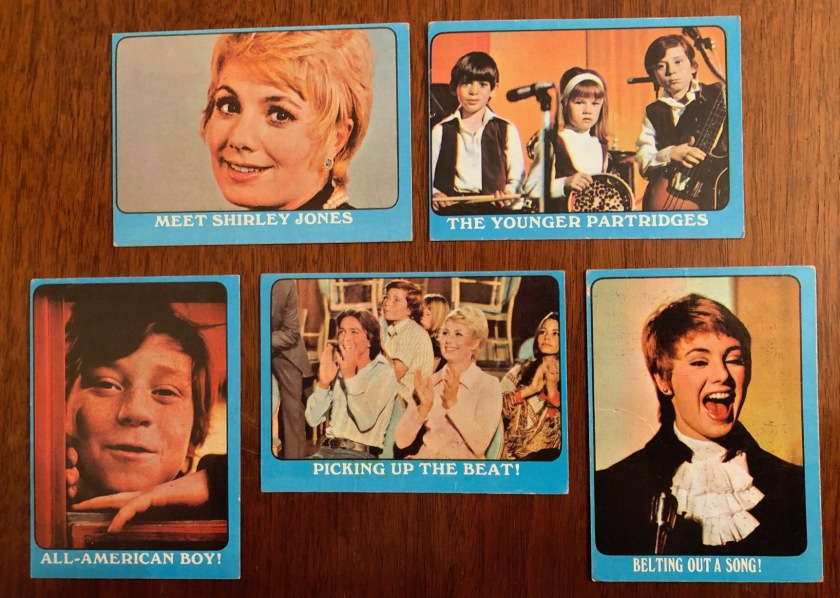 Shirley’s not really anticipating Gene Simmons whilst belting, but from a distance it sure appears so to me. I gotta say I appreciate all the enthusiasm in the card titles.

And what’s on the backs of these beauties? Pieces of a puzzle, actually of at least three puzzles: four of the cards come from Puzzle A, and one is from Puzzle C. Three actually go together:

Appears that Puzzle A is one of the band, with Shirley occupying the lower right corner.  Based on one piece, Puzzle C looks to be Keith in profile.

Oh yeah, forgot to mention the “Ask David Cassidy” feature on some border pieces. We’ve got two important matters on hand to discuss.

(On back of “Picking Up the Beat!”)
Q: What happens when you read false rumors about yourself in fan magazines?
A: It really bugs me, but I know that there isn’t much I can do about it. Just hope nobody believes the lies!

(On back of “All-American Boy!”)
Q: What’s your idea of a perfect date?
A: Just enjoying someone’s company and spending time with someone who likes being with me. It really doesn’t matter what we do either–just as long as we’re able to have some laughs.

Pretty much at the level of what you’d expect, eh?

It was no shock to discover this morning that cards from this series (there appears to have been more than one) are available on eBay. Can’t say I feel any compunction to add to the collection, but I might just spend some time this weekend trawling around to see what else was in the set. Many thanks go to Kurt and Mark for this rabbit hole, I guess…

6 thoughts on “Come On Get Happy!”