Ben came home from school one afternoon with a piece of paper in his hands, gave it to us, and asked, “Can I please do this this year? I have friends that are.” Our eight-year-old had recently started third grade and was brandishing information about an organizational meeting for Cub Scouts to be held soon at the school. This wasn’t the first time, of course—he’d showed interest a year earlier, when we’d chosen to dodge the issue. I had spent some good portion of a year in Cub Scouts, probably when I was a fourth-grader, but I don’t recall any particularly fun or interesting stuff that we did—not enough to want to continue, apparently.  Besides, neither Martha nor I are exactly the outdoorsy type.  But Ben was well aware that the father and son next door to us were heavily involved in Scouting; our son saw the boy, who was four years older, as something akin to a big brother. Whatever Brennen was doing, that’s what Ben wanted.

Fairly close to exactly nine years later, on Monday evening, Ben successfully navigated his Eagle Scout Board of Review, with a little over seven weeks to spare (he had until his 18th birthday). We’re very pleased for and proud of him. It turned out that he really enjoys camping and not bathing for days on end! But along the way he certainly learned many valuable skills. (As an aside, it’s no surprise that he elected to join Brennen’s Troop when he crossed over from Cub Scouts.)  When we asked him after the meeting Monday about his favorite Scouting memory, he named two: his High Adventure week of sailing in the Florida Keys, and participating in a National Youth Leadership Training Leadership Academy in the DC area (he’s also been on staff at his Council’s NYLT the past three years).

I went camping with Ben twice. The first was for a Scout Centennial Jamboree outside of Louisville in the fall of 10, while he was still a Webelo.  The second came in the summer of 15, on a trip to Muskegon, Michigan. We spent one night on the USS Silversides, a WWII submarine, and another in a local state park. Both were great times; looking back, I can say I wish I had done more of that.

Ben undertook his Eagle project last fall. Its primary focus was cleaning an almost century-old DAR monument near downtown Georgetown, but he also organized a sprucing-up of the area around the monument and replaced the flag on a nearby pole. Later, on a crisp, clear early November morning, there was a rededication and a flag retirement ceremony; members of the DAR and the mayor, among others, were in attendance. From there, just a few merit badges remained. He finished the final one, Family Life, this summer when he completed a landscaping project in our back yard.

At Ben’s Board of Review, the man serving as the chartered organization’s representative to the Troop, who has long ties to the community, gave Ben the photo you see at the top. It’s from the first dedication of the monument, in 1920. That’s quite an incredibly generous gift! The photographer was facing north; directly behind the assembled dignitaries, out of view over a hill, is Royal Spring, the land feature that made Georgetown a desirable spot to settle. There’s now a parking lot for our local electrical utility on the spot where the camera was set up.

It’s dangerous to thank by name the adults who helped guide Ben on this journey—I’m afraid I’ll fail to highlight someone who played a vital role. But I would be remiss if I didn’t specifically mention Ms. Rice for her three years of Cub Scout leadership, Mr. Caldwell, Mr. Maddix, Mr. Morris, and Mr. Baker, who served as Scoutmasters over Ben’s six-plus years in Troop 215, Mr. Rice, Mr. Shaffer, Ms. Homkes, Ms. Fryer, and Mr. Cleland for various Troop roles, Mr. Carruthers for his NYLT mentorship, and Ms. Hanes, for shepherding Ben through the Eagle process (the late Mr. Hanes also had an important part right after Ben crossed over). There were many others who did important work; please know Martha and I are appreciative of all of you. Any oversight in the list above is entirely on me.

We have hundreds of photos of Ben’s Scouting adventure from across the years. I’ll content myself with including just two here.  The first is obviously from Cub Scout days. Martha’s notes say it was taken on a day they went geocaching in Frankfort in the fall of 10. There were a couple other boys in his Pack, but most of the cohort is present here. Three of these pictured wound up staying through to Eagle rank—Ben (in the olive fleece) is the second to finish, but the third will be done very soon. 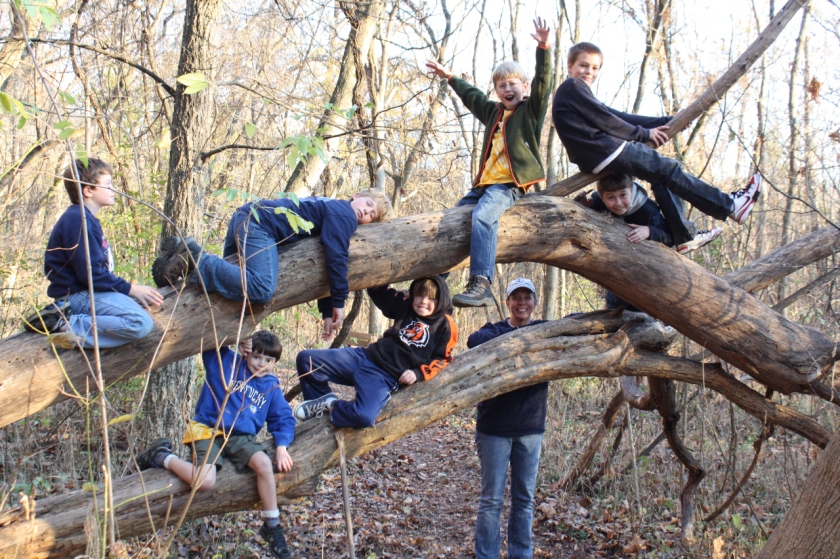 The second shows our boy working on the monument on the day of his Eagle project (plenty of others were there to pitch in—they’re just not shown in this picture). The view is of the same side you see in the 1920 photo—it’s such a different view! You can see the waterworks now present on the site of the spring behind it.

There will be a celebratory Court of Honor for Ben’s achievement in the coming weeks.  In the meantime, congratulations, son—may you continue to soar, and may what you do with your life be part of the solution.