Here is my 2/25/78 AT40 chart. My 78 charts were written on sheets from a spiral notebook, two to a page (2/18 is on the front).  In spite of my impression that I was in Cincinnati at night that weekend, I must have listened to the show, since I note both extras. My prediction success percentage for 3/4/78 was pretty lousy; I count about 5 correct, although my “picks” were #40 and #39 the following week. At the beginning of the year, I’d thought I was really going to trick out these charts, with stuff like “Song of the Week” and a “guess the mystery song” feature (that was supposed to go immediately below the top 10). I’m not sure I made it out of January with those items still running. 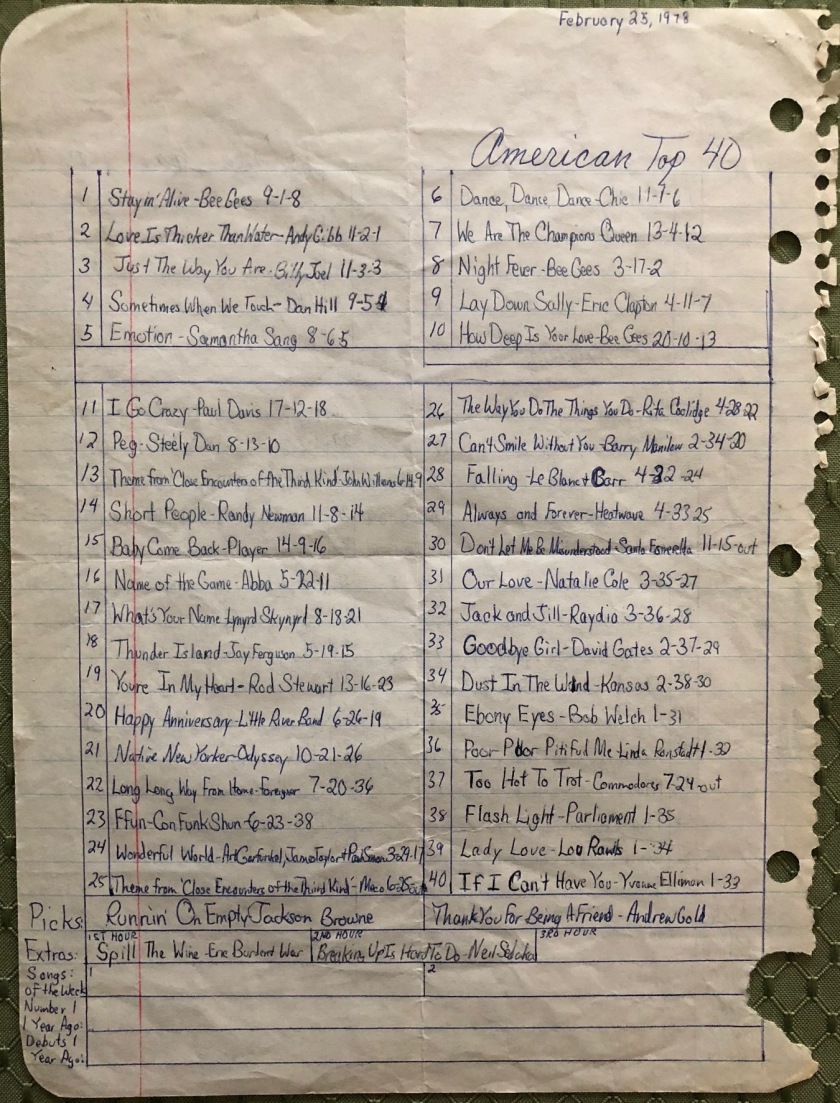 A few notes:
–“Under Pressure,” “Our Lips Are Sealed,” and “My Girl” were all former #1 songs. “Shake It Up” was in its third and final week at the top. Other than “Touch and Go,” I had loved all of the Cars’ singles. Those first two LPs of theirs are so, so good.
–“Sweet Dreams” is the only future #1 listed here. “I Love Rock ‘n’ Roll” topped out at #3 for three weeks. “Do You Believe in Love” was down at #35 here, but would spring to #11 the next week and pretty soon thereafter ascend to the top for a five-week run.
–“Centerfold” had made #2 but I burned out on it even before its run was over. Still largely feel that way.
–I don’t know what “Open Arms” is doing here. It climbed to #2; there’s no way I’d have it go that high now.
–Kinda the same story, though to a lesser degree, with “Through the Years,” which got to #6. It’s not that bad; I like it much more than I do “Lady” and “I Don’t Need You,” but I definitely thought more highly of it then than I do today. It would have been a better song if they’d cut out that return to the chorus at the very end.
–On the other hand, I’m a bit surprised to see that “You Could Have Been with Me” made my top 10. Kudos to me!
–I like lots of Hall and Oates songs, but “I Can’t Go for That” didn’t crack my top 10 (it reached #13). 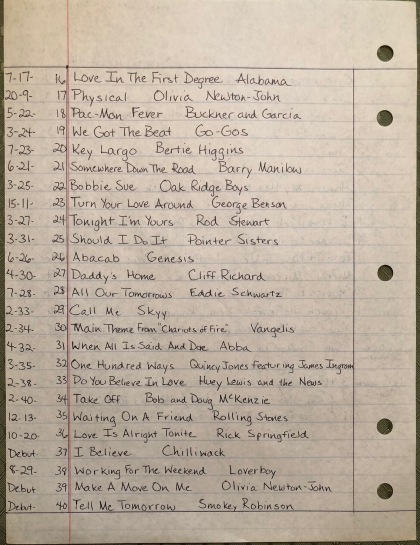 I must have listened to only the first half of this show, as the Sam Cooke extra from Hour #3 and the Irene Cara LDD from Hour #4 are missing. Making predictions had always been a somewhat hit-or-miss thing, but I was much less faithful about it toward the end of my chart-keeping days.