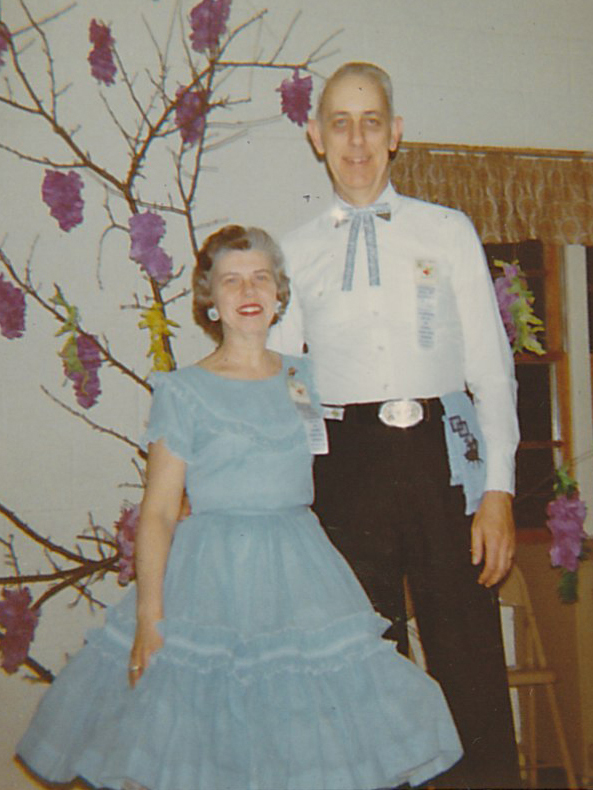 My in-laws were very much into square dancing; in fact, it was what brought them together as a couple. They were one of 18 founding pairs of the Harvey Bees, a group formed in March 58 that danced twice a month at Harvey Browne Presbyterian Church in Louisville. For years their caller was Ed Preslar, the proprietor of Preslar’s Western Shop (which still exists). I wasn’t surprised in the least when Martha showed me meticulous records that Austin had kept of the membership rolls through the years—when a couple joined, when they left, when one of the pair died. Within a decade, Kay and Austin were the only remaining original twosome.

Besides meeting on first and third Friday nights, the Bees also held annual “bivouacs” where they trooped out of town for a weekend of dancing and socializing.  These started in 63; at first, they were held at relatively rustic sites, like the Lions’ Camp Crescendo in Bullitt County. Beginning around 72, they moved to state parks, primarily Rough River Dam. The gatherings were family affairs, so Martha and Ruth attended for years—they even drove down once while they were in college.

Martha tells me how much she enjoyed watching her mother get dressed to go dancing. The picture above, taken in 70, is representative of what they wore. Some of Kay’s outfits were dresses, others were skirts with matching top, but all were accompanied by a multi-layered petticoat. Austin always had on a white shirt and black pants, with tie and towel color-coordinated with what Kay was wearing.

The daughters also found it a treat to get to watch their parents do-si-do. When they were young, Austin’s mother usually babysat, but occasionally they got to tag along to Harvey Browne. When the National Square Dance Convention was held at the Exposition Center in Louisville in 70, Grandmother Lutz took the girls over to see the mass of humanity promenade all around the floor of the hall.

As the years passed and the people of their generation aged, the Bees shrank in size. The bivouacs stopped in the early 90s. A more sedentary venture, a euchre (it’s a card game mostly popular in the Midwest) group, was birthed from the membership. (One of the first things I did to ingratiate myself to Kay and Austin, just months after I met them, was to create an individual—as opposed to pair—movement for a euchre gathering to be held at their house. My familiarity with circulation at small bridge games came in handy.) Finally, they elected to call it quits, formally dissolving in August 2002, just months before Austin died—I don’t know if that played any role or not. It’s amazing to think that they had participated for 44 years. I wish I’d gone to see them at least once.

About four years ago, we had an early 71 AT40 rebroadcast playing on the radio at home, and Martha perked up when Jerry Reed came on. I soon learned that the female Bees would often line dance in between sets while on bivouac. “Amos Moses” (#23, climbing to #8) was one of their go-to line dancing songs; Martha and Ruth regularly joined in. I asked Martha if she still remembers the moves, but she hasn’t demonstrated them for me yet.

I don’t recall hearing about the old alligator hunter back in the day, though I was familiar with the follow-up, “When You’re Hot, You’re Hot.” As it turns out, tomorrow’s feature is by an artist with the same last name as Amos.