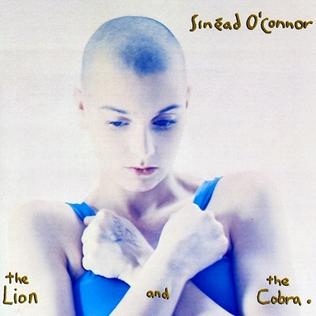 I don’t think there was any album rocking my world more at the end of 87/beginning of 88 than Sinéad O’Connor’s debut release. It feels like this is another one that came to my attention via Rolling Stone, but who knows for sure. That winter, John and I took to calling her the “bald Irish woman.” She knew how to grab your attention with her appearance, but it was the music that held it.

I’ve listened to this album more than I have the ones from Jane Siberry and Basia, so I’m more familiar with the tracks from The Lion and the Cobra that I didn’t include on this tape than the corresponding tunes from The Walking and Time and Tide. That makes this the one place where I’m sorta second-guessing myself about song selection: even though “Troy” is one of O’Connor’s more notable songs, if I had the chance for a do-over, I might swap that and something from Basia out for “Jackie” and “Just Call Me Joe.”

It’s a stunning recording overall, particularly in light of Sinéad being only 20 and serving as her own producer. The raw emotion, the combination of confidence and naiveté, and that voice all come together to crash over the listener in waves. I didn’t drown, and I kept going back for more.

I picked up the follow-up, I Do Not Want What I Haven’t Got, shortly after it came out in 90. Yes, “Nothing Compares 2 U” is a star turn, but outside of “The Emperor’s New Clothes” and “I Am Stretched Out on Your Grave,” I just wasn’t able to get much into it. It could be that I seek out musical talent like I do fantasy baseball players—always looking for the up-and-comer as opposed to the established star. Once O’Connor had that mega #1 song, I shuffled off looking for who might be next. She did herself no favors in terms of public regard with her behavior, almost from the beginning, though I recognize that abuse and mental illness are in play. I’ve not kept up with her music at all since the mid 90s, but I’m glad that she’s been able to continue recording.

I started with probably my second-favorite track, “Jerusalem.” It gives a solid overview of her vocal range; listen to how she sings the title, in what passes for a chorus.

Despite what I said above, “Troy” is a masterful, emotional piece. It strikes me as very personal/autobiographical, with her youth showing through maybe just a little too much.

While the opening song “Jackie” really does grab your attention, it wasn’t hard to hear the possibility of a hit record when it ended and “Mandinka” fired up. I still hear it on the radio every so often. I love, love, love it, and wish it’d become a bigger thing.

One gift I got from my parents at Christmas 87 was a key fob that beeped (three sets of six beeps) when you whistled–I had the well-earned reputation for losing track of my keys. Apparently, the notes O’Connor hit toward the very end of “Just Like U Said It Would B” (that title may have indicated it was inevitable that she’d record a Prince song someday, huh?) were right at the frequency of the fob’s sensor.  I can still hear the fob going off–twice, maybe thrice, each time I played this on my turntable–as she’s wailing the title over and over in those final 45 seconds. It was a great concluding song for the tape.